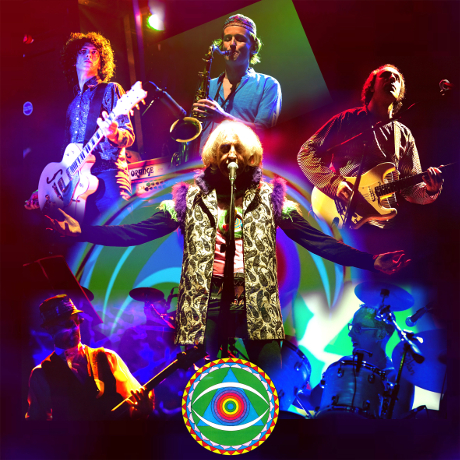 As you have probably heard I have just had a life threatening operation to have a cancer in my neck removed. I am relieved to hear from the surgeons that the cancer is fully contained and with six weeks of radiation therapy they expect a full recovery. As a result of this I have been advised to rest at least until the end of the year.

In the mean time this excellent band will continue to promote our new Album out on Snapper Records in September and fulfil the extended autumn UK/ European tour schedule booked.

I have to reassure you in full confidence and with my blessings that this band can easily put on a great show successfully without me. I have to say that after the last tour of Brazil I finished the shows with the feeling that this is one of the most exciting and dynamic Gong line ups to date.

The band for the tour is: The brilliant and accomplished new guitarist Kavus Torabi (ex Cardiacs) on guitar and vocals with the superb Brazillian solo and glissando guitarist Fabio Golfetti, My son Orlando Allen on both vocals and drums, the sinuous Dave Sturt on Bass, electronics and vocals and virtuoso Ian East ‘winds’ on horns and flutes.

This will be a fire cracker of a show, and due to the unexpected circumstances we have labeled it the Gong – You Can’t Kill Me Tour – 2014, including new songs promoting the album and some classic Gong favourites to please the fans. There will also be surprise guests throughout the tour from the history of Gong, including original members Steve Hillage, Didier Malherbe and a range of other well established performers who have expressed their full support and willingness to be involved, plus a fantastic light show and projections by Jasper Johns the No 1 artist in this field.

Of course, by supporting the Gong band in my absence, you will also be giving energy to my swift recovery and my return to the UK/Europe as soon as it’s humanly possible to perform. The release of the new album and this current line-up that will be touring this year means a lot to me, to Gong and to the next years of my performance in the UK and Europe.

With all my full hearted love,